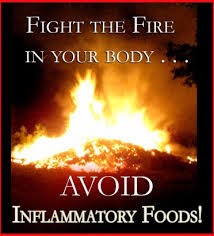 Your Favorite Food (Even Healthy Food) May Be Causing Inflammation in Your Body!

If you would have asked me 20 years ago what an inflammatory food was you would have probably gotten a look that resembled a deer in head lights.  I didn’t know anything about natural medicine or how foods affect the body, but I was slowly starting to realize a cause and effect relationship with foods and my body.  I was a sophomore in high school when I first experienced heartburn.  It was at that time when I first started noticing that after I ate school lunches that I would get a burning in my chest.  It was also the time that the drug companies were starting to fill the airwaves with drug commercials telling you that the answer is to take just one pill per day and I would never have the symptoms and would live a healthy life with no problems.  So what did I do?  I made an appointment with my MD and sure enough he prescribed the little purple pill that I saw on TV and BAM!!! My heartburn was gone!!  At least I thought…

So as time went on, I graduated high school and went on to college and continued to live the same lifestyle.  I was as active as you could be, playing sports and eating anything I could get my hands on (as any good college student does) because I didn’t think anything of it.  If I got heart burn I would just pop a little purple pill and my stomach and esophagus would settle.  Well that lasted until I was about 22 years old.  I would get flared up from certain foods and next thing I was taking two purple pills to make my esophagus feel better.  I had isolated what foods and events were triggering me to have this discomfort and that is about the time I started to wise up, I just stopped eating those trigger foods and my heartburn stopped.

I like to share this story because it is one of the personal examples of how I began to figure out which foods were the ones to eat for optimal health.  You must listen to your body when it comes to foods.  If a food flares you up in one way or another, it is best to avoid that food and let at least six months pass before considering introducing that food back into your diet.

Foods may not always exacerbate a symptom that you can feel but they may trigger other unwanted responses in the body.  Most often that negative response deals with the immune system. Foods are inflammatory in two ways: (1) flare your immune system; or (2) flare up various tissues in your body.   [Click to Tweet] Here are 2 ways to find out if what you are eating is causing inflammation in your body.

I have had multiple patients come into the office that have never noticed any reactions to a food but when we do food sensitivity testing, the results show that the are sensitive to 10 different foods.  Food sensitivity testing can tell you if a certain food flares up your immune system.  [Click to Tweet]  Foods can often mimic other natural chemicals in your body and bind up receptor sites that aren’t really meant for them.  This can cause a response in the body that excites the immune system and can ultimately lead to inflammation of a variety of tissues.  In this case you must test and not guess.  Otherwise, you will never know if a food is flaring up your immune system.

This is different from my example where I would eat a food and it would make my esophagus burn.  It was often highly acidic foods that would upset my esophagus.  Many patients in the past have reported foods giving them brain fog, gas, bloating, or even headaches.  When foods trigger negative side effects, then they are inflammatory and you must avoid them to allow the body time to heal.  A great case I had helps explain how one food is inflammatory to digestive tissue but not inflammatory to the immune system.  I had a 14-year-old female present with lactose intolerance and other digestive ailments.  We did a full work up on her and decided on a complete food sensitivity panel to help figure out foods would be best for her.  Sure enough, she did not have an immune sensitivity to dairy but she still could not eat dairy because the lactose in dairy products caused her stomach to hurt and give her loose bowel movements.  So in her case the dairy made her digestive cells irritated but did not cause an immune reaction.

Another practice to find out if a food is causing inflammation in the body is to have a qualified practitioner muscle test you for certain foods or food groups.  Muscle testing dates back to ancient times and various practitioners around the world us it to help heal those they are testing.   You can tell you whether or not a food energetically is the best for you to eat by holding a certain food and performing a muscle test. [Click to Tweet] Muscle testing is performed on almost anyone, even infants, and is an effective method of analysis for natural healers alike.

If you or anyone you know has any doubts in their mind about the foods they are eating, have them read this blog and consider the options to figure out which foods are the best to put in their body.  Should you not know where to get tested for food sensitivities or if you have any questions, then comment to this blog and I can point you in the right direction or bring you in to see me!

Real Wellness Doc is the official blog by Functional Endocrinology of Ohio, an organization that gives hope to those who lost it, heals those who need it and inspires those who seek it. Dr. Keith Ungar and his team work dedicatedly for their patients to restore their God-given health potential.

Find us on Social Media